'The Territory' Review: Saving The Amazon, One Camera At A Time 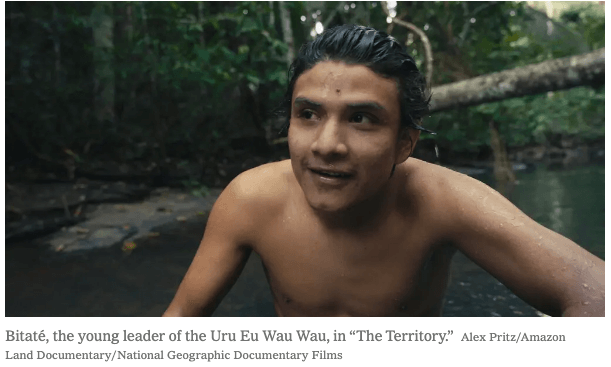 “Save the rainforest” has been a constant refrain among environmentalist groups for the past half-century, but no recent film captures the immediacy of the threat better than “The Territory,” Alex Pritz’s documentary feature debut, which had its premiere earlier this year at Sundance.

National Geographic Documentary Films acquired the rights to the movie after it screened, and given the distributor’s current interest in gripping thrillers (“Free Solo,” “Fire of Love”), it’s no surprise that this feature, covering the embittered conflict between Brazilian cattle ranchers and an Indigenous group in the Amazon rainforest, fits right into its lineup. But “The Territory” is more than meets the eye, revealing its most profound observations in stages across its running time. The film’s luscious cinematography captures the sun-dappled island of jungle where the Uru Eu Wau Wau reside, a land slowly being consumed by flames as farmers and other settlers illegally raze the forest for pastures, with few repercussions.

While the two opposing groups are given near-equal amounts of screen time, Pritz does not draw a false equivalency between the two; in fact, the longer time is spent with the farmers, the more alarming their gap of understanding toward the Uru Eu Wau Wau becomes. A particularly zealous cattle rancher, whom Pritz repeatedly returns to, describes his settlement as a divine right and bemoans the Indigenous group’s defense of their territory: “Why should they be allowed to stay? They do not work the land, they just live in it.”

Pritz heightens the stakes with the story of Neidinha Bandeira, a Brazilian environmental activist who has received death threats because of her work. But it’s only after the Uru Eu Wau Wau choose to trek deeper into their land — a decision brought on by both a violent tragedy and the looming threat of the Covid-19 pandemic — that the film takes on a life of its own. Bitaté, a young leader for his people, works with other Uru Eu Wau Wau members to set up drones and additional cameras to document illegal settlers in their home. (When a journalist requests to send cameramen into the jungle to follow their guerrilla activism, Bitaté responds, “Send us the shot list — we’ve got it covered from here.”) Cinematography credit is shared between Pritz and Tangãi Uru Eu Wau Wau.

To see the villagers take matters into their own hands, capturing proof of the encroachment on their land that the government chooses to ignore, is a special kind of thrill.