HOW TO PRODUCE AN INDIE HIT: USE PATIENCE AND NURTURING 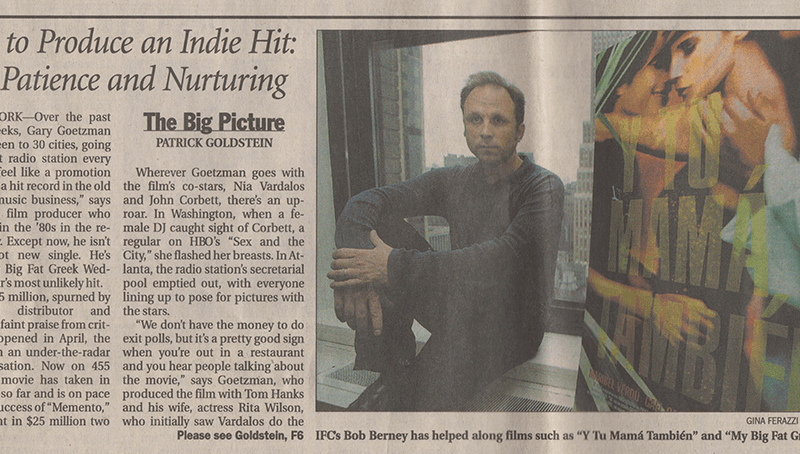 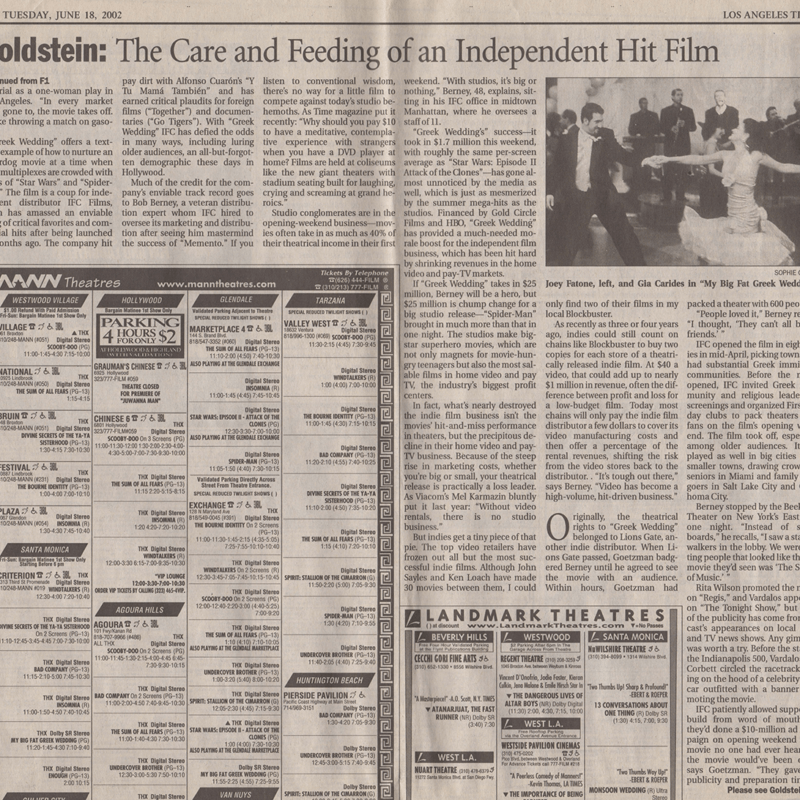 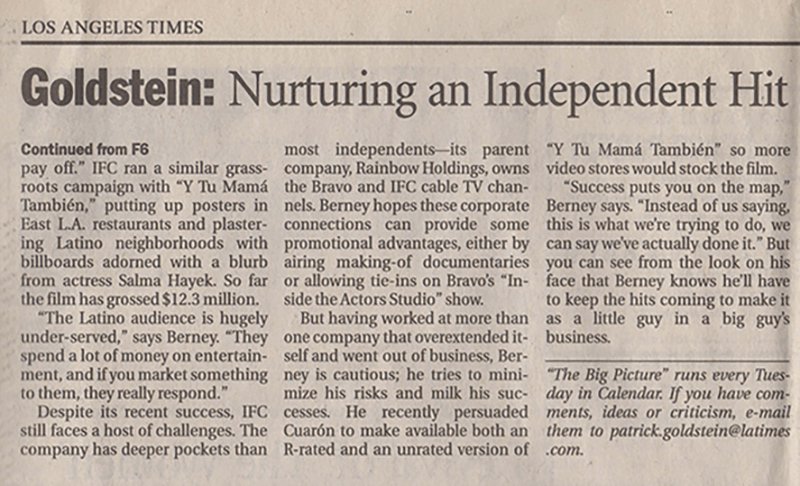 Over the past six weeks, Gary Goetzman has been to 30 cities, going to a different radio station every morning. “I feel like a promotion man working a hit record in the old days of the music business,” says Goetzman, a film producer who got his start in the ’80s in the record industry. Except now, he isn’t touting a hot new single. He’s pitching “My Big Fat Greek Wedding,” the year’s most unlikely hit.

Made for $5 million, spurned by its original distributor and damned with faint praise from critics when it opened in April, the film has been an under-the-radar industry sensation. Now on 455 screens, the movie has taken in $13.6 million so far and is on pace to equal the success of”Memento,” which brought in $25 million two years ago.

Wherever Goetzman goes with the film’s co-stars, Nia Vardalos and John Corbett, there’s an uproar. In Washington, when a female DJ caught sight of Corbett, a regular on HOO’s “Sex and the City,” she flashed her breasts. In Atlanta, the radio station’s secretarial pool emptied out, with everyone lining up to pose for pictures with the stars.

“We don’t have the money to do exit polls, but it’s a pretty good sign when you’re out in a restaurant and you hear people talking about the movie,” says Goetzman, who produced the film with Tom Hanks and his wife, actress Rita Wilson, who initially saw Vardalos do the material as a one-woman play in Los Angeles. “In every market • we’ve gone to, the movie takes off. It’s like throwing a match on gasoline.”

“Greek Wedding” offers a textbook example of how to nurture an underdog movie at a time when most multiplexes are crowded with prints of “Star Wars” and “SpiderMan.” The film is a coup for independent distributor IFC Films, which has amassed an enviable string of critical favorites and commercial hits after being launched 18 months ago. The company hit pay dirt with Alfonso Cuar6n’s “Y Tu Mama Tambien” and has earned critical plaudits for foreign films (“Together”) and documentaries (“Go Tigers”). With “Greek Wedding” IFC has defied the odds in many ways, including luring older audiences, an all-but-forgotten demographic these days in Hollywood.

Much of the credit for the company’s enviable track record goes to Bob Berney, a veteran distribution expert whom IFC hired to oversee its marketing and distribution after seeing him mastermind the success of “Memento.” If you listen to conventional wisdom, there’s no way for a little mm to compete against today’s studio behemoths. As Time magazint• put it recently: “Why should you pay $10 to have a meditative, contemplative experience with strangers when you have a DVD player at home? Films are held at coliseums like the new giant theaters with stadium seating built for laughing, crying and screaming at grand heroics.”

Studio conglomerates are in the opening-weekend business– movies often take in as much as 40% of their theatrical income in their first weekend. “With studios, it’s big or nothing,” Berney, 48, explains, sitting in his IFC office in midtown Manhattan, where he oversees a staff of 11.

“Greek Wedding’s” success-it took in $1.7 million this weekend, with roughly the same per-screen average as “Star Wars: Episode II Attack of the Oones” -has gone almost unnoticed by the media as well, which is just as mesmerized by the summer mega-hits as the studios. Financed by Gold Circle Films and HBO, “Greek Wedding” has provided a much-needed morale boost for the independent film business, which has been hit hard by shrinking revenues in the home video and pay-1V markets.

If “Greek Wedding” takes in $25 million, Berney will be a hero, but $25 million is chump change for a big studio release-“Spider-Man” brought in much more than that in one night. The studios make bigstar superhero movies, which are not only magnets for movie-hungry teenagers but also the most salable films in home video and pay tv, the industry’s biggest profit centers.

In fact, what’s nearly destroyed the indie film business isn’t the movies’ hit-and-miss performance in theaters, but the precipitous decline in their home video and pay- 1V business. Because of the steep rise in marketing costs, whether you’re big or small, your theatrical release is practically a loss leader. As Viacom’s Mel Karmazin bluntly put it last year: “Without video rentals, there is no studio business.”

But indies get a tiny piece of that pie. The top video retailers have frozen out all but the most successful indie films. Although John Sayles and Ken Loach have made 30 movies between them, I could only find two of their films in my local Blockbuster.

As recently as three or four years ago, indies could still count on chains like Blockbuster to buy two copies for each store of a theatrically released indie film. At $40 a video, that could add up to nearly $1 million in revenue, often the difference between profit and loss for a low-budget film. Today most chains will only pay the indie film distributor a few dollars to cover its video manufacturing costs and then offer a percentage of the rental revenues, shifting the risk from the video stores back to the distributor .. “It’s tough out there,” says Berney. “Video has become a high-volume, hit-driven business.”

Originally, the theatrical rights to “Greek Wedding” belonged to Lions Gate, another indie distributor. When Lions Gate passed, Goetzman badgered Berney until he agreed to see the movie with an audience. Within hours, Goetzman had packed a theater with 600 people.

“People loved it,” Berney recalls. “I thought, ‘They can’t all be his friends.'”

IFC opened the film in eight cities in mid-April, picking towns that had substantial Greek immigrant communities. Before the movie opened, IFC invited Greek community and religious leaders to screenings and organized First Friday clubs to pack theaters with fans on the film’s opening weekend. The film took off, especially among older audiences. It has played as well in big cities as in smaller towns, drawing crowds of seniors in Miami and family filmgoers in Salt Lake City and Oklahoma City.

Berney stopped by the Beekman Theater on New York’s East Side one night. “Instead of skateboards,” he recalls, “I saw a stack of walkers in the lobby. We were getting people that looked like the last movie they’d seen was ‘The Sound of Music.'”

Rita Wilson promoted the movie on “Regis,” and Vardalos appeared on “The Tonight Show,” but most of the publicity has come from the cast’s appearances on local radio and TV news shows. Any gimmick was worth a try. Before the start of the Indianapolis 500, Vardalos and Corbett circled the racetrack, riding on the hood of a celebrity pace car outfitted with a banner promoting the movie.

IFC patiently allowed support to build from word of mouth. “If they’d done a $I0-million ad campaign on opening weekend for a movie no one had ever heard of, the movie would’ve been over,” says Goetzman. “They gave the publicity and preparation time to pay off.” IFC ran a similar grassroots campaign with “Y Tu Mama Tambien,” putting up posters in East L.A. restaurants and plastering Latino neighborhoods with billboards adorned with a blurb from actress Salma Hayek. So far the film has grossed $12.3 million.

“The Latino audience is hugely under-served,” says Berney. “They spend a lot of money on entertainment, and if you market something to them, they really respond.” Despite its recent success, IFC still faces a host of challenges. The company has deeper pockets than most independents-its parent company, Rainbow Holdings, owns the Bravo and IFC cable TV channels. Berney hopes these corporate connections can provide some promotional advantages, either by airing making-of documentaries or allowing tie-ins on Bravo’s “Inside the Actors Studio” show.

But having worked at more than one company that overextended itself and went out of business, Berney is cautious; he tries to minimize his risks and milk his successes. He recently persuaded Cuaron to make available both an R-rated and an unrated version of “Y Tu Mama Tambien” so more video stores would stock the film.

“Success puts you on the map,” Berney says. “Instead of us saying, this is what we’re trying to do, we can say we’ve actually done it.” But you can see from the look on his face that Berney knows he’ll have to keep the hits coming to make it as a little guy in a big guy’s business.