HIS WEEK: PASSION AND OSCAR HOPEFULS 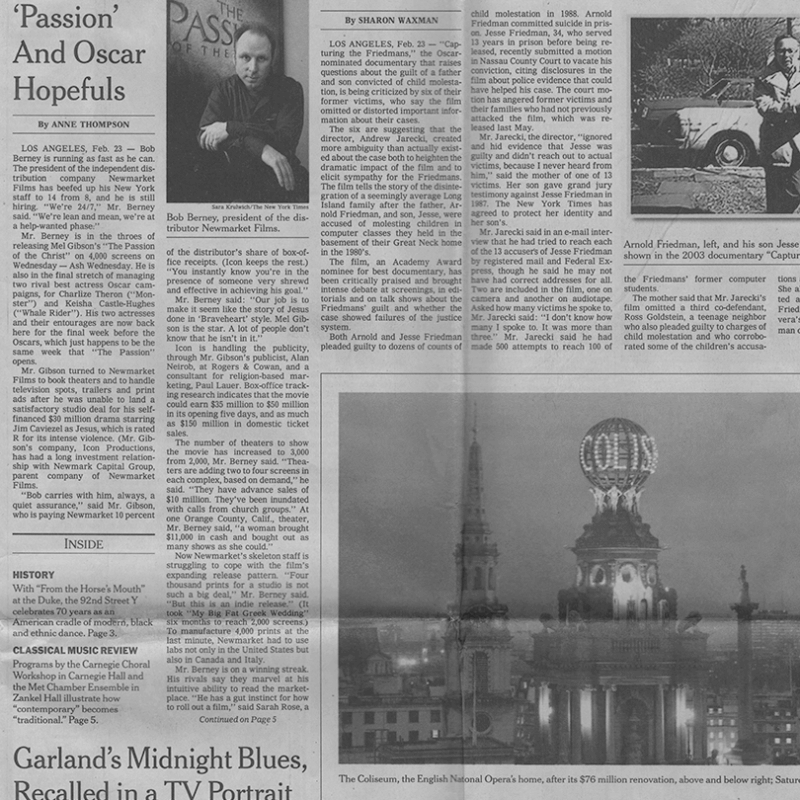 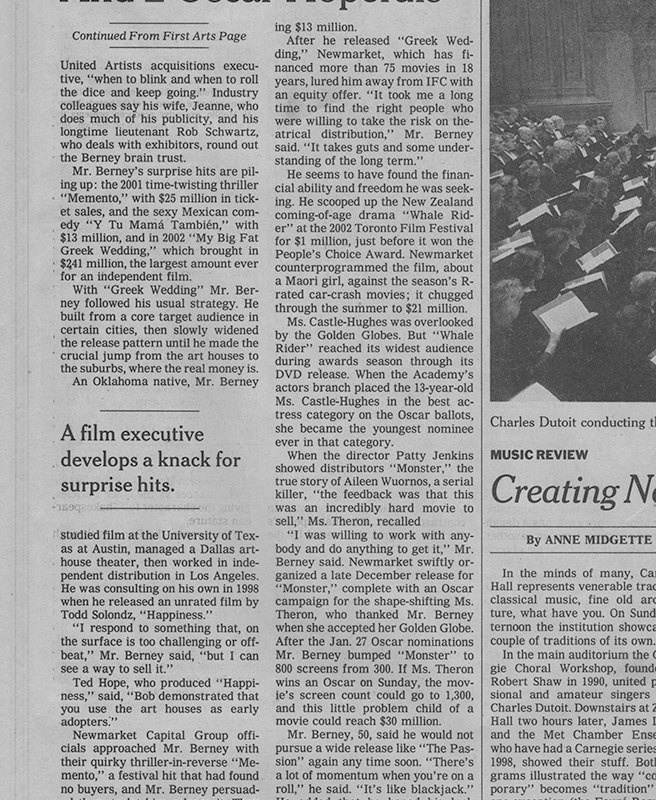 Bob Berney is running as fast as he can. The president of the independent distribution company Newmarket Films has beefed up his New York staff to 14 from 8, and he is still hiring. “We’re 24/7,” Mr. Berney said. “We’re lean and mean, we’re at a help-wanted phase.”

Mr. Berney is in the throes of releasing Mel Gibson’s “The Passion of the Christ” on 4,000 screens on Wednesday – Ash Wednesday. He is also in the final stretch of managing two rival best actress Oscar campaigns, for Charlize Theron (“Monster”) and Keisha Castle-Hughes (“Whale Rider”). His two actresses and their entourages are now back here for the final week before the Oscars, which just happens to be the same week that “The Passion” opens.

Mr. Gibson turned to Newmarket Films to book theaters and to handle television spots, trailers and print ads after he was unable to land a satisfactory studio deal for his selffinanced $30 million drama starring Jim Caviezel as Jesus, which is rated R for its intense violence. (Mr. Gibson’s company, Icon Productions, has had a long investment relationship with Newmark Capital Group, parent company of Newmarket Films.

“Bob carries with him, always, a quiet assurance,” said Mr. Gibson, who is paying Newmarket 10 percent of the distributor’s share of box-office receipts. (Icon keeps the rest.) “You instantly know you’re in the presence of someone very shrewd and effective in achieving his goal.”

Mr. Berney said: “Our job is to make it seem like the story of Jesus done in ‘Braveheart’ style. Mel Gibson is the star. A lot of people don’t know that he isn’t in it.”

Icon is handling the publicity, through Mr. Gibson’s publicist, Alan Neirob, at Rogers & Cowan, and a consultant for religion-based marketing, Paul Lauer. Box-offfce tracking research indicates that the movie could earn $35 million to $50 million in its opening five days, and as much as $150 million in domestic ticket sales.

The number of theaters to show the movie has increased to 3,000 from 2,000, Mr. Berney said. “Theaters are adding two to four screens in each complex, based on demand,” he said. “They have advance sales of $10 million. They’ve been inundated with calls from church groups.” At one Orange County, Calif., theater, Mr. Berney said, “a woman brought $11,000 in cash and bought out as many shows as she could.”

Now Newmarket’s skeleton staff is struggling to cope with the film’s expanding release pattem “Four thousand prints for a studio is no such a big deal.” Mr. Berney said. “But this is an indie release.” (It Took ‘My Big Fat Greek Wedding” six months to reach 1000 screens.) To manufacture 4,000 prints at the last minute, Newmarket had to use labs not only in the United States but also in Canada and Italy.

Mr. Berney is on a winning streak. His rivals say they marvel at his intuitive ability to read the marketplace. “He has a gut instinct for how to roll out a film,” said Sarah Rose, a United Artists acquisitions executive, “when to blink and when to roll the dice and keep going.” Industry colleagues say his wife, Jeanne, who does much of his publicity, and his longtime lieutenant Rob Schwartz, who deals with exhibitors, round out the Berney brain trust.

Mr. Berney’s surprise hits are piling up: the 2001 time-twisting thriller “Memento,” with $25 million in ticket sales, and the sexy Mexican com. edy “Y Tu Mama Tambien,” with $13 million, and in 2002 “My Big Fat Greek Wedding,” which brought in $~41 million, the largest amount ever for an independent film.

With “Greek Wedding” Mr. Berney followed his usual strategy. He built from a core target audience in certain cities, then slowly widened ‘ the release pattern until he made the crucial jump from the art houses to the suburbs, where the real money is.

An Oklahoma native, Mr. Berney studied film at the University of Texas at Austin, managed a Dallas arthouse theater, then worked in independent distribution in Los Angeles. He was consulting on his own in 1998 when he released an unrated film by Todd Solondz, “Happiness.”

“I respond to something that, on the surface is too challenging or off- beat,” Mr. Berney said, “but I can Ted Hope, who produced “Happiness,” said, “Bob demonstrated that you use the art houses as early adopters.”

Newmarket Capital Group officials approached Mr. Berney with their quirky thriller-in-reverse “Memento,” a festival hit that had found no buyers, and Mr. Berney persuaded them to let him release it. They – made a handshake deal. “They just said, ‘You go do it,’ ” Mr. Berney said. “I didn’t have a lot of barriers.” He took the movie to $25 million and a screenwriting Oscar nomination. see a way to sell it.”

He joined IFC Films in New York, . and his run continued with the unrated subtitled comedy “Y Tu Mama Tambien,” which scored with both Hispanic and Anglo audiences, earning $13 million.

After he released “Greek Wedding,” Newmarket, which has financed more than 75 movies in 18 years, lured him away from IFC with an equity offer. “It took me a long time to find the right people who were willing to take the risk on theatrical distribution,” Mr. Berney said. “It takes guts and some understanding of the long term.”

He seems to have found the financial ability and freedom he was seeking. He scooped up the New Zealand coming-of-age drama “Whale Rider” at the 2002 Toronto Film Festival for $1 million, just before it won the People’s Choice Award. Newmarket counterprogrammed the film, about a Maori girl, against the season’s Rrated car-crash movies; it chugged through the summer to $21 million.

Ms. Castle-Hughes was overlooked by the Golden Globes. But “Whale Rider” reached its widest audience during awards season through its DVD release. When the Academy’s actors branch placed the 13-year-old Ms. Castle-Hughes in the best actress category on the Oscar ballots, she became the youngest nominee ever in that category.

When the director Patty Jenkins showed distributors “Monster,” the true story of Aileen Wuornos, a serial killer, “the feedback was that this was an incredibly hard movie to sell,” Ms. Theron, recalled.

“I was willing to work with anybody and do anything to get it,” Mr. Berney said. Newmarket swiftly organized a late December release for “Monster,” complete with an Oscar campaign for the shape-shifting Ms. Theron, who thanked Mr. Berney when she accepted her Golden Globe. After the Jan. 27 Oscar nominations Mr. Berney bumped “Monster” to 800 screens from 300. If Ms. Theron wins an Oscar on Sunday, the movie’s screen count ·could go to 1,300, and this little problem child of a movie could reach $30 million.

Mr. Berney, 50, said he would not pursue a wide release like “The Passion” again any time soon. “There’s a lot of momentum when you’re on a roll,” he said. “It’s like blackjack.” He added that he hoped his luck would now extend to films he picked up at festivals, like “Stander,” a South African thriller starring Thomas Jane ; the Danish black comedy “The Green Butchers”; and the Sundance Film Festival hit “The Woodsman,” starring Kevin Bacon as an improbable hero: a pederast. Next fall watch Mr. Berney try to get Mr. Bacon an Oscar nomination.